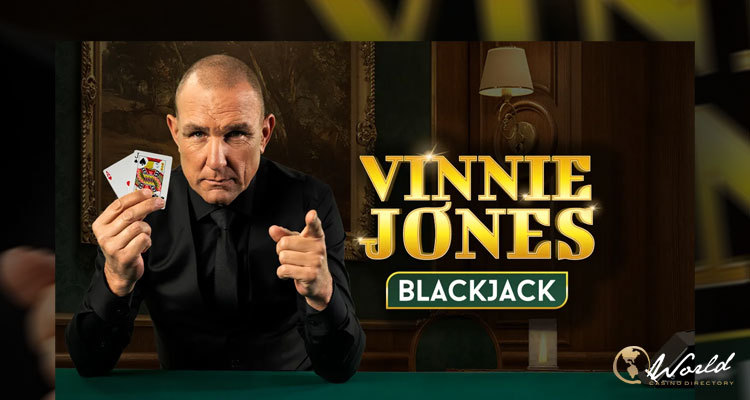 Real Dealer Studio’s new series of games is here – and its main character is a well-known football and film legend, Vinnie Jones.

The newest game, Vinnie Jones Blackjack, features the amazing British actor – and is finally live. This is actually the first blackjack title with a celebrity as the main star.

The game is designed with the cinematic RNG, a unique process that Real Dealer developed so the players could enjoy an exceptional cinematic experience watching a high-quality video. At the same time, it integrates into a random number generator.

Everything is subordinated to the cinematic experience: it is like a movie where Vinnie is the main character who can hang out with players one-to-one, allowing them to meet this astonishing character.

In this game, Vinnie’s role is the VIP dealer, while players are seated around in the members-only club. He correspondent with the moves of every player, keeping his cheeky remark while dealing the next card or throwing in.

This game consists of 21+3 side bets, along with insurance side bets and the 6-card Charlie rule. Combining great filmmakers with actors with outstanding reputations, it’s not surprising that everyone believes this game is destined for great success. By now, computer-generated graphics are the only things used in games like this one. But with RNG, everything changed.

Shane Cotter, Chief Product Officer at Real Dealer Studios, said: “There just hasn’t been anything like this on the market before – an RNG blackjack game with this sort of personal interaction, and starring a celebrity to boot.”

The first game featuring Vinnie Jones is the Vinnie Jones Roulette, released in September. Speaking of this game, Jones himself stated: “Can you believe they put a geezer like me in charge of roulette? Trust me, you’re gonna love this game. It’s just like regular roulette, but loads better, because of me”.

Vinnie Jones Blackjack is the second one, and the next one to be released is Vinnie Jones Stories Roulette, which will go live on November 14th.

The good news for fans of this series is that the series won’t end here – more games are expected to be released during the next year.

These titles are currently available solely from Games Global.

Vinnie Jones‘s games successfully blur the line between games and movies, especially with a host as amazing as the famous football star and actor. There will be even more innovations in a game that is expected soon – and here’s a hint: Jones will be answering the interview type of questions that his magnificent co-host named Rachel will be asking. So, there’s only one left to say – we can’t wait!