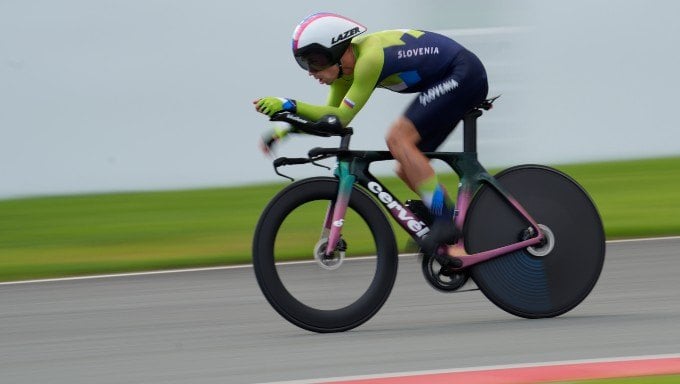 Team Jumbo Visma announced Monday that Roglič will compete in Vuelta a Espana 2022. The grand tour starts on Friday in Utrecht, Netherlands, and ends on Sept. 11th in Madrid, Spain.

The contention from Jumbo Visma is that Roglič is healthy enough that the team chosen can help him in all facets of the 21-stage event.

The eight-man team tweeted “We have a good and balanced team at the start that can optimally support Primož in all areas.”

If the Slovenian cyclist can pull this feat off, he will tie Roberto Heras for most Vuelta victories with four.

Sportive director @merijnzeeman: "We have a good and balanced team at the start that can optimally support Primoz in all areas."

One bit of bad news for Roglič

There was a little hope that Koen Bouwman would be able to ride in the Vuelta, but injury will keep the rider out. Bouwman made big waves during the Giro D’Italia, and Roglič and company will miss his excellent form.

To compensate for that loss, Rohan Dennis has been included. If Dennis is in any kind of solid form, that will be a massive asset for the entire team, particularly Roglič  The group, as constructed, can “nurse” the Slovenian through the first week, which is not too rough until the end.

It is not all up to Roglič after all; there is Sepp Kuss

That’s the thing. The cyclist has been training for weeks supposedly. Roglič is a world-class athlete that knows no fear. Even at 32 years old, he is a top talent on the bike but always carries risk. As his crashes at the Tour de France illustrate, one has to hope he can stay upright. If Roglič remains healthy, he could be a contender at the end of the second week.

Another significant ally will be Sepp Kuss. The American climber did yo-yo a bit during the Tour de France but appeared in better shape for La Vuelta. Kuss even has +2500 odds to win the whole thing, mainly because of the second week and some odds and end hills during the final week.

At the very least, Kuss has the talent to climb any mountain. Along with Robert Gesink, Jumbo Visma has constructed a team to help its GC rider while having a contingency plan(s) in place.

As for Kuss, the feeling is he could win at least one of the mountain top stages. Look to Stages 14 or 15 as they have inclines where Kuss can attack, then hold off the rest of the field.

Some of these inclines are as high as 14 or 15+% in the opening mile. Stage 14 has more of a respite with a relatively flat section. That might be the more optimal launching point for Kuss.

Either way, Kuss will not be the only prominent American in this field.

Brandon McNulty created some buzz with how he rode during this year’s Tour de France. The young American rider will get a chance to help Joao Almeida in his quest for La Vuelta glory. Almeida is considered one of the favorites to contend with, and McNulty should be able to help him on the seven mountain stages and several hilltop finales the grand tour is well known for.

Cycling bettors should note that Almeida (+650) could see his numbers lengthen. McNulty could factor in the mountain stages, and some third-week hilltop finishes. The American won three times early in the season, and his work for Tadej Pogacar showed maturity and stamina in his riding style.

While Kuss has won stages in La Vuelta before, do not count out McNulty here.

The number might even be lower depending on the wagering site.

Stay tuned for our grand preview of La Vuelta later in the week.

The action starts Friday with a team time trial.