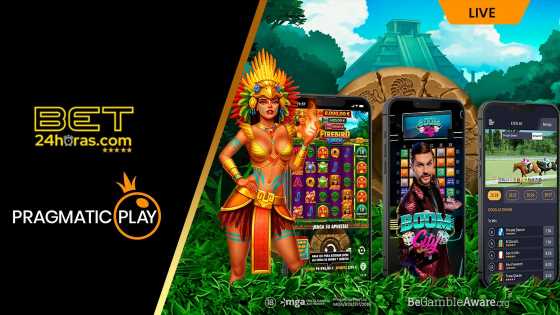 iGaming content provider Pragmatic Play continues to expand its footprint in Brazil. In its latest deal, the provider has seen three of its verticals go live in the country with operator Bet24horas.

Pragmatic Play's complete slot portfolio of more than 250 titles is now available to the brand's players, including recent releases like Aztec Blaze and Octobeer Fortunes as well as fan favorites such as Gates of Olympus.

Under the terms of the agreement, Bet24horas' Live Casino fans will now also have access to the supplier's entire catalog of titles, which includes casino classics like Roulette and Blackjack and contemporary gameshow titles such as Sweet Bonanza CandyLand and Mega Wheel as part of the mix.

“Latin America, and Brazil particularly, continues to be a source of accelerating commercial growth for Pragmatic Play and this rollout with Bet24horas maintains that trajectory,” the company further stated.

Victor Arias, VP of LatAm operations at Pragmatic Play, said: “Brazil is a hotbed of potential and we are seeing that with the number of new partners coming on board with us. Bet24horas represents another significant platform for our content in a country where players continue to enjoy our games.”

A representative at Bet24horas commented: “We're committed to offering the best range of entertainment to our players and this new content is a significant boost to that goal. Pragmatic Play titles are well loved in Brazil so we're delighted to be able to offer them on our online casino.”

This new deal follows an announcement last week through which Pragmatic Play confirmed it is set to sponsor the upcoming SBC Summit Latinoamérica, which will take place in the Seminole Hard Rock Hotel & Casino in Florida, November 1-3. The upcoming expo is expected to give the supplier's plans “a significant push” as its footprint keeps expanding in the Latin American region.