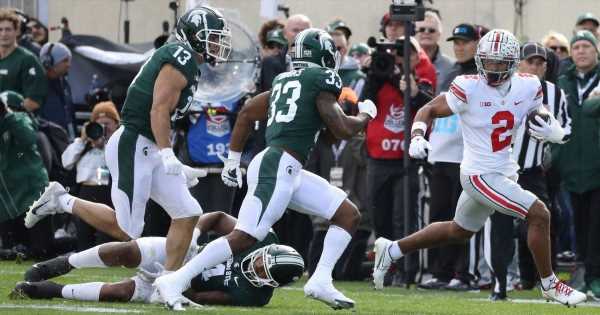 The longstanding theory this season’s College Football Playoff would consist of Alabama, Georgia, Ohio State and essentially a straggler appears to essentially be thrown out after Tennessee’s 52-49 win over the Tide on Saturday.

The Volunteers’ victory set the stage for perhaps a chaotic ending to the college football regular season. Tennessee still has to play No. 1 Georgia and No. 19 Kentucky, while Georgia and Alabama have multiple ranked matchups left.

Outside the SEC, the team with the clearest path to the CFP is No. 2 Ohio State, which is one of the reasons sportsbooks currently list the Buckeyes as the national title favorites.

To hep with your college football betting, here’s a breakdown of the favorites and the key matchups remaining for each.

Ohio State to Win the National Title is +170

Out of the main contenders, Ohio State’s title odds saw the most movement during the offseason.

The Buckeyes were as high as +800 the night after Georgia defeated Alabama for the 2022 national title and dropped all the way to +300 before the 2022-23 season began.

Ohio State has just two marquee games left on the schedule. The Buckeyes head to Happy Valley for a showdown with No. 16 Penn State on Oct. 29 before eventually hosting its annual rivalry matchup with No. 4 Michigan on Nov. 26.

Besides those two matchups, Ohio State is expected to be massive favorites against Iowa, Northwestern, Indiana, Maryland and whoever it faces in the Big Ten title game.

Georgia is +190 to Win the College Football Title

Similar to Ohio State, Georgia controls its own destiny and will be favored to do so going forward. Nov. 5 is the showdown with No. 3 Tennessee, which could determine the SEC East champion.

The Bulldogs also have ranked matchups at No 24 Mississippi State and No. 19 Kentucky left on its schedule, but they will be sizable favorites in each of those contests.

After a lethargic 26-22 win over Missouri, Georgia has returned to its dominant form, topping Vanderbilt 55-0 and Auburn 42-10.

Alabama is Now +450 to Win the National Championship

Despite falling to No. 6 in the Associated Press poll, Alabama still is among the favorites on odds boards.

Even with the loss, Alabama still has plenty of control over how its season can play out. On Nov. 12, the Tide heads to No. 7 Mississippi in a showdown that will likely determine the SEC West winner.

If Alabama makes it to the SEC Championship game, it will likely face either Georgia or Tennessee, where a win will assure itself a spot in the CFP.

If you’re just cheering for utter chaos as a fan, then you’ll like this scenario: Georgia beats Tennessee in the regular season but loses to Alabama in the SEC title game.

Leaving Georgia, Alabama and Tennessee each with one loss but Georgia has beaten Tennessee, and Tennessee has defeated Alabama but Alabama has topped Georgia and is the conference champion.

How the CFP would handle that situation is anyone’s guess, but the drama and arguments leading up to the CFP selection show would be appointment viewing.

The Tigers haven’t exactly set the world on fire and needed overtime dramatics to defeat Wake Forest 51-45 back on Sept. 24 to remain unbeaten.

The ACC continues to be one of the weakest Power 5 conferences to the point where a matchup with undefeated No. 14 Syracuse is somehow one of Clemson’s final tests of the regular season.

After Saturday, the Tigers won’t face another ranked team the rest of the way before the ACC title game. But a conference championship and name recognition could be enough to get them in as the fourth team in the CFP.

Michigan is Hanging Around, +1600 to Win Title

Run the table and beat Ohio State and the No. 4 Wolverines are in. It’s that simple.

No need to go any deeper into their situation.

Expected the Volunteers to be a little lower considering I wonder if they could still get in the CFP even with a loss to Georgia and Alabama went on to win the SEC.

Georgia might be the only team in the country equipped to stop the Volunteers’ uptempo, aerial attack.

No. 19 Kentucky hasn’t shown enough offense consistently to score with Tennesee, and the rest of the Volunteers’ schedule consists of Tennessee-Martin, Missouri, South Carolina and Vanderbilt — all teams who are essentially cupcakes.

If you’re wondering about the Pac-12 or Big 12, No. 9 UCLA and No. 8 TCU are the favorites from those conferences to win it all.

But the competition in each conference doesn’t exactly inspire a ton of confidence in either, and even if one or both went undefeated and won their conference, it’s worth wondering if they would make it in over a one-loss Alabama, Georgia or Tennessee.