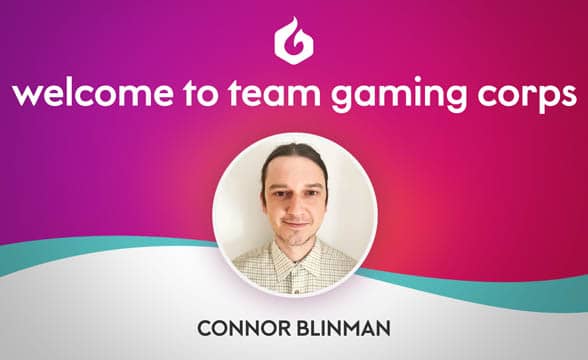 Blinman has spent his entire career working in game design. After graduating from the University of Portsmouth in 2017 with a Bachelor’s Degree in Computer Games Enterprise, he joined gaming entertainment supplier Play’n GO. Starting as a junior game designer, Blinman worked on an array of video slot titles, contributing with his colleagues from the product’s inception to its release.

Working for such a high-profile developer was an excellent opportunity for Blinman to refine his skills and gain additional insight. During his nearly four-year tenure, he eventually rose to game design team lead, demonstrating his ability to combine game development with the new position’s management and oversight duties.

The new position at Gaming Corps is the next logical step in Blinman’s career. He will put his previous knowledge to good use and continue to work across multiple types of gaming products. His hire also heralds Gaming Corps’ return to slot games.

Blinman was optimistic about the new position, expressing excitement to expand the development team and help expand Gaming Corps’ diverse portfolio of games. He confirmed that the content pipeline was already fully engaged, which means exciting new products should be underway.

My strategy over the coming year or so is to build the team with the best in the industry. We will scale up production to exceed the expectations of our commercial clients and delight their players.

With a proven track record of successful titles and a focus on streamlined, efficient game delivery, Blinman should be a fine addition to the Gaming Corps team. His desire to maintain the developer’s diverse offerings and differentiate it from other providers perfectly matches Gaming Corps’ ambitions, which means we can expect exciting future developments.

Gaming Corps Is on an Ambitious Path

Gaming Corps’ recent push to expand its production team reflects the developer’s desire to expand its presence in the iGaming sector. The company already has a pedigree in video game development, but gambling content has been an ever-increasing focus.

In 2022, Gaming Corps is pursuing aggressive expansion, completing several vital distribution deals with studios and operators. The agreements paved the way for the developer, substantially boosting its reputation and brand recognition. After securing a Gibraltar license thanks to a partnership with Relax Gaming’s platform, Gaming Corps secured its place as a prominent new player in the iGaming space, focused on delivering best-in-class content.