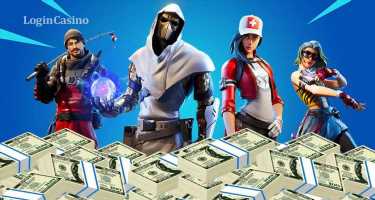 Fortnite Revenue: How Much Money the Game Makes and Why

Fortnite can be easily considered as one of the most breakthrough gaming projects in the world. It’s a free-to-play activity but its developers have earned billions of dollars, while the Battle Royal mode has revolutionized the gaming industry. Login Casino continues following the most interesting esports news, explaining a phenomenal case of Fortnite earnings.

The video game Fortnite is the ownership of Epic Games company, which is a rather experienced firm in the gaming industry. It was founded 30 years ago in 1991 by Tim Sweeney but had another name – Potomac  Computer Systems, which came from the town Potomac, where his parents were living. The first game's release led to the transformation of the firm's name to Epic MegaGames in just a year, while in 1999, the title was simplified to Epic Games.

A year before, in 1998, the company developed an Unreal Engine, which became a breakthrough technology in computer games development, making the developing and playing process better. Even years after the release, this game engine approach remains a usable technical platform, especially after releases of new versions that include all the available modern approaches. Partially, the popularity of Unreal Engine lies in its flexibility, as it can be used by other game developers, even by those who produce games for diverse platforms, including different consoles and computers.

The role of Fortnite in firm's success

Interestingly, the role of Fortnite in Epic's attempt to achieve peaks was huge. Even though the Chinese gaming giant Tencent bought almost half of the manufacturer's equity in 2012, the further year launched the chain of irreversible rising popularity. Thus, Epic Games announced Fortnite in 2013, but the long testing period lasted almost four years. During this period, the game changed the third version of Unreal Engine to the fourth one, which slowed down Fortnite's release.

Since that time, Epic Games has made a few revolutionary things. First of all, with the help of Fortnite, they showed that the traditional market approach of earning on games selling isn't the only axiom in the industry. Secondly, the game developing brand challenged the biggest game stores like Steam, App Store, and Google Play Market. However, let's go step by step.

Who made Fortnite a top game?

Actually, there is no need to directly answer this question as it is too obvious (and described in the previous section). However, if we rephrase it to "What made Fortnite a top game," multiple variants will appear.

To begin with, let's explain that there are three game modes that have different ideas:

If to return to the elements that made the game so popular, first of all, Fortnite came at the right time in terms of marketing features. Besides the free-to-play model with in-game purchases only (will be described below), a mix of new playing approaches was successfully combined into the single game. Finally, multiplatform technical spreading allowed conquering the world.

The importance of streaming on game popularity

The world's overall digitization allowed relying on alternative sources of content except for the TV, radio, and print outlets. We won't talk about social media as the way to receive entertainment and focus on the role of streaming as an alternative to older ways of taking human time. Fortnite was technically good prepared for streaming, while people gladly welcomed the entertaining content.

The following chart shows the number of unique active viewers of Fortnite on a monthly basis. While the graph is quite shaky, the game roughly keeps a 100+ million audience via Twitch only, who likes to watch both the professional tournaments and amateur streams. Such huge popularity is the perfect precondition for the game's popularity.

Those who like tricky titles will definitely enjoy the "cooperative hybrid-tower defense-shooter-survival game," which is a description of the concept. Moreover, all this is made in the zombie-like post-apocalyptic and cartoon style, which can be played both in the team cooperation version and Battle Royale mode.

The latter deserves special attention as this game mode has become extremely popular in the latest years. Although the first examples like Minecraft and ARMA 2 saw the world in the 2010th, the appearance of the dozens of players' survival boosted not only Fortnite but also PUBG, Call of Duty: Warzone, and Apex Legends. All the games received vast popularity and are different by in-game mechanics and visualization, fulfilling the market with demanded options.

Another vital element is that Fortnite became extremely competitive throughout all the available gaming platforms. Epic Games made a really playable product for PCs, consoles, while the mobile version was rather popular until summer 2020. That was the beginning of the corporate war between Apple and Google vs. Epic Games, which is still unresolved and will be described in this article's further financial section. Nonetheless, the issue of the most attractive competitive mobile games is on the rise and cannot be ignored by game developers, and Epic Games understand it well.

So, when answering the question "who makes Fortnite," one won't make a mistake if they tell that multiple unique features have boosted a game's popularity. At the same time, a huge base of supporters allows to stabilize the attention to this gaming product and feed the developers' interest and forces useful updates.

Is Fortnite free to play, and why is it profitable?

It can be quite unexpected for the unprepared person, but one of the world's most popular games is really free to download and play. At the same time, Epic Games received multimillion income on a monthly basis from in-game purchases. Let's review this quite new form of making money in more detail. It's vital to inform that purchased objects aren't having any influence on the in-game process and are fully decorative.

In-game purchases' psychological basis lies in the plane of human desire to be unique and show it. Like millionaires buy old exclusive cars to their collection to show their unicity, gamers make everything possible to look uniquely. They are ready to spend real money to buy new skin for weapons or their appearance, and every gamer with an exclusive object facilitates the desire of others to look even better.

Interestingly, but a similar approach is used in other games. For example, let's review another global gaming franchise – Counter-Strike: Global Offensive. Its developer, Valve, made the game free for downloading and playing, but the part of in-game abilities isn't open for the thrifty newcomer. At the same time, every player has a chance of receiving simple skins for weapons (which doesn't make it better damaging or faster reloading) after a successfully played map, but such objects are cheap and aren't too attractive. Moreover, the user can receive a traditional loot box with solid artifacts inside but needs a buy-only key to open it. All in all, most gamers donate to the game in order to receive a chance for getting a CS:GO most expensive skin, which can cost up to a few thousand dollars.

In simple terms, such an approach is built around creating a specific funnel, where the gamer is surrounded by unique visual elements and intuitively doesn't want to be in the grey zone. At the same time, some of the in-game purchases are really cheap and are available even for schoolers with some pocket money. Nevertheless, as soon as they enter this appearance and skin world, it's hard to stop an intrinsic collector's behavior.

After the surrounding aspects were described, it's time to turn on a calculator and look at the impressive numbers in terms of profits. Open data claim that the game has made about $2.4 billion and around $1.8 billion in 2019. Being a popular and well-known entertainment, Fortnite significantly benefited from the first wave of lockdowns in March 2020. Thus, the developers reported about a $400 million revenue just in April – the fourth month of 2020. Taking into account the increase of the game's popularity during the tough first half of 2020 (shown in the chart below), the profits will definitely increase, but no official data is available yet.

The issue of defining the exact amount of the revenue in 2020 is accompanied by the long-lasting lawsuit between Epic Games and Apple/Google. In short, Epic disagreed with the 30% fee taken by App Store and Play Market for all in-game purchases, launched an alternative option of buying in-game money, and soon, platforms deleted the game. Fortnite developers have quickly accused Apple and Google of breaking antitrust laws, and this lawsuit is still far from resolution.

Nonetheless, the portion of mobile-generated revenue is huge nowadays but is lost for Epic Games since August 2020. Even though "only" $25 million monthly from mobile earnings on average were missed, the game was still pretty popular and flourishing. All in all, we can suppose that Epic Games received around $2 billion in revenue in 2020.

How much money has Fortnite made since its release?

If to suggest that Fortnite brought about 2 billion dollars in 2020, the game's total revenue had already overpassed $6 billion. However, the results of hardly predictable 2020 can be more optimistic, and the $7-billion level won't surprise.

While the game experiences some controversial earnings in annual terms, it's quite surprising that Epic Games didn't turn their attention to the esports industry. Thus, they awarded Kyle "Bugha" Giersdorf solely with $3 million in 2019 after his perfect show on the world championship, but Fortnite cybersport events' total budget was slightly less than $8M for the whole year 2020. Epic Games has announced that there would be no World Cup in 2021, which means that Fortnite didn't join the developing esports sector. It can significantly hit their future popularity and revenues of the regarded game.

What is Fortnite net worth?

While the revenue of Epic Games, thanks to Fortnite, looks astonishing, with around $6 billion since release, the issue of net worth is quite more complicated. Thus, all the spendings related to the game are also measured by 10-digit amounts, as the huge team of developers has spent a lot of time before the release and continues supporting the game since 2017.

As there is no open information about the spendings related to Fortnite, it's hard to be sure about the net worth that the game has brought. Nonetheless, some sources reported about $2 billion in the middle of 2020, which means that spendings at that moment were around $3 billion. Taking into account that Fortnite is the most successful product of Epic Games, there is no doubt that the company was using the revenue from the game to develop some related products like Epic Store. At the same time, sources informed that Tim Sweeney's net worth was around $7 billion, which could mean that he had a huge salary and declined the income brought by Fortnite.

Read more: What games are a priority for top esports teams?

Read more: Is it possible to invest buying Twitch stocks?