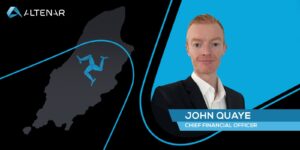 Altenar ready for growth with Isle of Man office expansion Altenar has made a number of key appointments in its Isle of Man office as it continues to expand its operations. The expansion of the office will enable Altenar to support existing customers further and the opportunity for the company to recruit additional key roles.

Alongside that, Altenar has recently become an Institute of Chartered Accountants England and Wales Training Employer, as it aims to offer development opportunities across their international team.

Altenar has also confirmed that new CFO, John Quaye, has been appointed to lead the office with the aim to further develop key areas of the business as the company continues to grow and to also drive Altenar’s financial strategy.

Quaye has a wealth of experience as a CFO, joining Altenar after several years as a CFO and Managing Director in the Trust and Corporate services sector. He has considerable knowledge of the Isle of Man, which will prove invaluable in his new role.

Altenar has appointed Quaye on the back of its most successful year ever, with multiple awards in 2022 for its outstanding contribution to the industry.

These include Best Virtual Sports Supplier at the EGR Nordics and Sportsbook Supplier of the Year at the EGR Italy Awards, as well as multiple accolades at the MiGEAs and Baltic and Scandinavian Betting Awards.

Stanislav Silin, CEO at Altenar, said: “We are delighted to be expanding our Isle of Man office and this is the first step in next level expansion for 2023.

“I am also really excited to announce that John will be at the forefront of the operation in the Isle of Man, and he will build a team underneath him that can support the pace of growth we are seeking to achieve. The CFO is highly visible and a sign of our ambitions to continue to scale the business.”

John Quaye, CFO at Altenar, said: “I am really pleased to join Altenar and I am confident that Altenar will continue to go from strength to strength.

“Whilst still relatively new to Altenar, what struck me was the strong team environment across multiple jurisdictions. Altenar is a company made up of many experts in different fields coming together to deliver a great product with a great service. There is a real pride in what we do and we celebrate Altenar’s successes as a team.”